Have you, at some instance, let your mind run idle for an extended period of time? Let’s say you have a full month holiday without anything to do and your movement is limited within the boundaries of your hometown. And you’re not the kind of guy who’s always fueled up to do various socially positive activities even just to kill your time. Admit it, in this age of internet, there will always be times when your ass seems to be glued on the bed and all you can think of is to surf the net for hours earning seemingly informative trivial news to reduce your couch potato guilt. When you finally killed the laptop off outta boredom and the day turned into night into day again, what you let free is the enormous uncontrolled power of your mind: channeling and condensing your every thought into an imaginative stream of consciousness, where you set up an entirely fictitious system from what you know about how the world outside could operate. Now, maybe I’m exaggerating, but what I’m trying to imply is that your mind probably will bloom off with random, insignificant ideas and often negative concepts about how people and things in your close proximity work. Or maybe even your own fundamental philosophy that you think the whole world should be based upon. 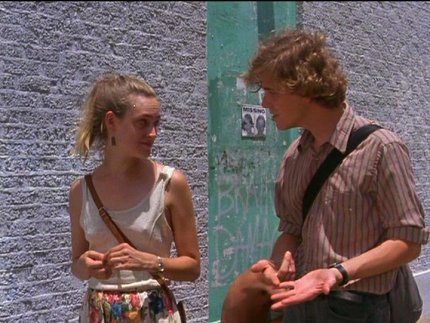 Writing a lengthy movie review is just beyond my thought process capabilities for today, but it feels obligatory for now to spill my beans about Richard Linklater’s Slacker (1991). It’s an incredibly simple low budget movie, following around the common folks in Austin, Texas as they converse with one another, jumping from one person walking and talking to the next guy crossing their path on the street and so on, a 24-hour life of slackers rambling about various topics ranging from a monologue about parallel universe to a nerdy JFK assassination conspiracy theorist. Without a plot whatsoever. An exact definition of what Bruce Willis-blowing-everything-up worshipers call a ‘boring movie’, Slacker brought us the model concept of people who make just enough and have too much time on their hands as deep-digger into the obscure and often subjective field of knowledge (UFO buff? War veteran anarchist?) and put their routines into the big screen for us to follow around and bitch about how tasteless it is. This is social interaction depicted at its dullest, yet for those able to sense the level of feelings evoked on these ‘conversational movies’, there is so much to be learned. This movie is Linklater’s debut, yet it has proved his quality compiling seemingly mindless daily-life convos and tailor them into a remarkably watchable feature-length story. What I’m trying to say is Before Sunrise, Before Sunset, Waking Life, A Scanner Darkly and the kind, they’re all Linklater’s.

Okay, it’s clear that the movie is targeted for American audience of the 90s as it is a ‘culture movie’ at its core, capturing and depicting the idyllic life of the Generation X twentysomethings, but what’s more than meets the eye is how they are the same to us in absorbing various news and theories without hesitation nor clarification — a barrel of knowledge seen only through one hole, one point of view. And it all goes without us actually doing anything about it. It’s the same all over the world, people criticizing and compelling about everything from how the government has made secret deals with the USA to the so-called rupturing moral of the country through porn videos. And while not everyone does those due to slacking, it’s the lack of actions involved that can be seen as direct slacking. Yes, I’m writing this in the vain of the Indonesia’s 65th independence day, and while I’m never a nationalist at best, you can obviously make things better for yourself (and presumably those around you, if you’re not that self-centered) with the consistent will to move your ass and actually do it. Maybe you’re too far from changing the world, and it’s not like we can make major change without a suppressive will, but at least you can start from tidying up your own life, smile a lot, take chances, stuff like that. You might be living comfortably now, only you don’t know it can be better once you actually do something. Uh, okay, I’m writing this primarily for myself. Hell, it’s out of my habit to write in such a positive light. Anyway watch Slacker and decide which one looks better, living in a status-quo stalled life of not actually doing and achieving anything or, uh, that movie provides no actual comparison in the storyline. Happy August 17th!