Saturday, March 20th 2010. I was in the front of stage 2 with some friends at the FestiveSound listening to Sore finishing their song “Vrijeman” when Bianca told us that the main attraction on stage 3 is about to play, so we all move inside of Sasana Budaya Ganesha to prepare seeing the Scottish band, the star of the night, Camera Obscura twee-ing live in front of thousands of their fans in Bandung.

Note that I’m not a fan of this band, not hating it either, more of a casual listener. Inside I met Dipta (that evening was the first time I actually met her non-cyberworld, didn’t know she’s quite a small girl hehe) and she said to put the review of the concert on the blog, so here it is. When finally the MC mentioned the name “Camera Obscura” and the two big guy of the band entered the stage continued with the charming look of Tracyanne Campbell, the excitement of the crowd is already high. The guys didn’t talk much and straightly played “My Maudlin Career”, a song which, unfortunately, relatively unknown to the general audience that compromised about half of the people there — but their next track “Tears for Affairs” was able to spark singing from parts of the crowd. 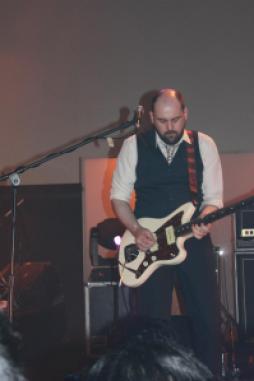 Coming from the United Kingdom, the guys seem to be pretty excited to twang their guitars on a country they probably never cared about before, in front of perhaps thousands of people from half the world away that can sing along to the choruses of their songs. After their singles “French Navy” and “Honey in the Sun”, continued with “James” to stall the spirit of the audience, Tracyanne jumpstarted them by asking to sing along to the famous line “Hey Lloyd, I’m Ready to be Heartbroken”, much to the enthusiasm of the showgoers. Her smile upon listening to the whole hall singing the heartbreaker anthem was priceless. It was the face of an artist feeling the true achievement of a musician, being able to touch the soul of the people from a country they probably hardly ever heard of to sing the very songs they make throughout their career. That wasn’t the end though, as they continued with the thumping of “If Looks Could Kill”, another sing-along track “Let’s Get Out of This Country” and “Come Back Margaret” (Carey Lander was once asked to sing by Tracy, but she seemed to be too shy indeed) before finally taking off the stage… with the people screaming “We want more”, of course. Coming back with smiles on their faces, saying that they should’ve played ten songs, some of the crowd requested “Dory Previn” in high pitches but instead they played the epic-sounding “Razzle Dazzle Rose” as the concert finalé. Then they finally went off the stage for good with the drummer saying thank yous. And that was a great live performance indeed, a showcase that in these days, the formerly obscure indie pop scene has now become something more appealing for the mainstream (or hipster) masses to savor.

That’s all I can write as long as I can remember, wait up for the Kings of Convenience (and Jens Lekman) review — they’ll be playing this weekend!