My mind’s been wandering off lately once I got in front of this computer so I forgot to write last week’s treasure of the week. Well, I’ll just give ya two today, one album and one… movie! But I don’t usually download movies, so no links this time guys, haha. Just get your hands on one outside, it’s only around Rp. 6000. And about the album, have you ever got the chance to listen to An Albatross’s The Family Album? These noise-rock heroes sure give you an adrenaline pump with every listen of this 2008 album. Well honestly I still can’t define “noise rock” as this term seems to cover an overly wide range of music, but Wikipedia and Last.fm says so, whatever then. The tracks are highly energetic, they sound almost like a wall of distorted guitar banging on your ears yet in the same time still give you some memorable synth notes. Some said that their greatest came in the We Are The Lazer Viking album, but I’ll dig that one later. Guaranteed to crush your ears down! If you’re interested, do some Google Blog Search.

loved track: The Hymn of the Angel People

Oh and yeah, a good movie to watch. I just watched Changeling on DVD a few days back and it truly left a good taste. This Clint Eastwood work of art features the 1928 Los Angeles with Angelina Jolie as a single mother named Christine Collins, whose only son Walter Collins one day mysteriously disappeared when she came back from work. Her effort to track Walter down seemed to be fruitless as the corrupt LAPD, and its Juvenile Division led by Captain Jones, hardly gave any progress in the search. But after four tiring months, LAPD declared to had found Walter Collins and, under the blinding blitz of excited journalists, reunited the mother and son in a seemingly happy ending moment. Christine however, couldn’t believe what she had seen: the Walter Collins in her face is not her son. Who is this kid? And where had the real Walter actually been?

Now wait, keep in mind that this is NOT a fantasy movie. No tiny leprechauns actually hiding Walter, the truth won’t come that easy. There, I know you hate spoilers as much as I do so I won’t spill anything more than that. You’d have to watch it yourself to grasp the true love and determination a mother has when it comes to her children. The 1930s setting is beautiful and haunting, the cinematography often portrayed scenes in dark or poorly-lit rooms to enhance the depressing aura. Jolie was a good cast as she perfectly brought down the depressed and worrying thoughts of a mother losing her son. It’s frightening yet touching at times to see how cruel human beings can be. This 141 minutes of drama might tire your eyes at a slow pace, but in the end it’s your emotions that will be drained down. 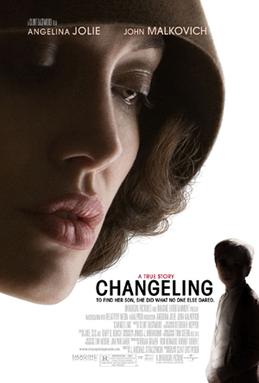